The New Year’s Tradition of the Carriers’ Address

As we make our way further along into the 21st century, we history nerds here in the Local History Department thought it would be fun to share with you an old New Year’s tradition. Even though it lasted over two centuries, it has since fallen out of fashion, but we think it’s still pretty cool. Carriers’ Addresses were a form of poetry, a sign of a New Year beginning, and a chance for a newspaper subscriber to thank the carrier for bringing them the news of the day, hopefully with a little tip included.

Carriers’ addresses began in newspapers in England in the early 18th century and then naturally made their way over to the colonies and continued after the
forming of the new country and government. They were printed on January 1st and in the early years they contained just a simple one page document, usually a poem and a thank you from the carriers. The poem could be written in the form of a look back at the events of the year, or it could emphasize the important work and the daily struggles of the carriers. The earliest in our collection is from 1819 and was actually the work of Henry Livingston (you might remember him from an earlier blog entry). In it, he mentions some of the modern day events and you might not recognize unless you are a student of history,

“Ere long the western lakes will glide
And meet the Hudson’s flowing tide
Commerce will hail the fond embrace
And smiles illumine Labor’s face
Science and art will both rejoice
To join the all-applauding voice
The Atlantic pendant then will wave
O’er realms which western billows lave
And barks of pleasure skim the floods
O’er-hung by Huron’s lofty woods
This chain of union, strong and bright
Will bind Fed’ral quiver tight
Millions unborn will bless the man
Who first conceived the enlightened plan
And on the high recording fane
Will shine the immortal Clinton’s name”

Do you know what he is talking about? He mentions western lakes meeting the Hudson River and the idea being conceived by DeWitt Clinton, it can be none other than The Erie Canal. By 1819, the canal was under construction and this piece talks about the promise of its success.

As the 19th century progressed, the Carriers’ Address morphed into a decorative pamphlet usually with lovely illustrations that could be just as interesting as the poetry. In 1889, the Poughkeepsie News Press put together a pamphlet complete with an embossed cover and comic like format. It combines both poetry and illustrations to express the need for newspapers, and how history might be different if there had been newspapers since the beginning of humanity.

“Suppose, for instance, Noah had had
A file of daily papers
Containing full reports of all
Antediluvian capers;
And full accounts of rain and flood
Up to the hour of sailing;
Suppose he had – at this late day
Regrets are unavailing”

On the last page the address mentions the importance of the free press and its place in history. It also asks the subscriber to consider the hard work of the carrier,

“But now, as fast as history’s made, it’s by the press recited,
And busy hands and giant steam, in harmony united,
Are garnering for future use a harvest overflowing,
For generations yet unborn – but what’s the use of blowing?
You know what’s what as well as I; you have a bright example
I leave you daily at your door the very finest sample
Of what will be, in years to come, the history of all nations
The richest legacy to leave to future generations
Our age provides the faithful press, preserver of its history,
Its rays illumine every page and banish every mystery
Give it to-day one kindly thought; another, we implore you,
To him whose pleasure it has been to place this tale before you.”

We as historians know all too well the importance of the newspaper. We turn to it for much of our research. We also, like the news carriers of old, want to wish you a Happy New Year! 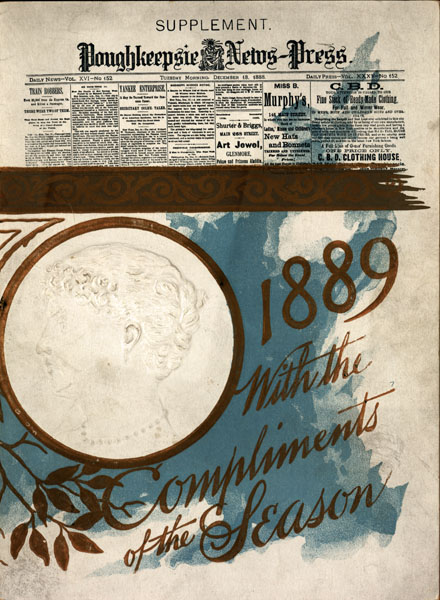