We have some wonderful things stored away in boxes and folders here in the Local History Room. Every once in a while we come across something that we forgot we had and when we come across it again, we remember just how cool it really is. Recently we were asked if we had some photographs by a female photographer named Margaret DeMott Brown. As it turns out, we have quite a few of them. As it turns out, Margaret had a studio right here in Poughkeepsie and much of her work was based on subjects in and around Dutchess County. We thought we would join in with the Dutchess County Historical Society’s endeavor to celebrate Women’s Voices and Talents by showcasing some of Margaret’s work.

Margaret DeMott Brown was born in Jacksonville Illinois on March 1st, 1880, into a family that believed in the education of women. Her grandfather William Holden De Motte had been instrumental in the foundation of schools for women as well as the deaf. Margaret appears to have been interested in photography for quite some time, as evidence shows her beginning to advertise the sale of her photographs in 1905. Also around this time, she began teaching photography at one of the deaf schools who grandfather had operated.

By 1917, Margaret is mentioned in the Poughkeepsie Journal as being entertained at the home of Vassar Professor Woodbridge Riley and that she wanted to come back and live in Poughkeepsie and set up a studio to work on her new passion for Pictorial photography. It would not take her long because the following year, her uncle died and left her enough money to set up her own studio. She set up her studio on Raymond Ave. By November of 1918 an advertisement appeared in the Vassar Miscellany Newspaper proclaiming that Margaret’s studio was open for business and that her work had already been exhibited in New York and several museums throughout the country. By the 1930s her photographs were also appearing in the New York Times.

She also managed to make friends with some influential locals including Franklin Delano Roosevelt, who she photographed for the Dutchess County Historical Society yearbook, and Helen Wilkinson Reynolds. Her friendship with Reynolds would produce several historical works including the books “Dutchess County doorways” and “Dutch Houses in the Hudson Valley Before 1776.” Some of those photos can be seen to the right. She showcases in wonderful detail, the woodwork and craftsmanship seen in early local houses, many of which are now long gone. She also took some striking portraits of Reynold’s mother, Mrs. John R. Reynolds as seen on the right.

Margaret would continue in her work as a photographer for many years and died in 1959, though not in Poughkeepsie, she had moved to Springfield MA to be with her mother her was ill back in 1942. You can find some of her work at https://mainandmarket.poklib.org/ and also be sure to head over to The Dutchess County Historical Society to see more about Margaret’s work and life.  https://dchsny.org/mdmb/ 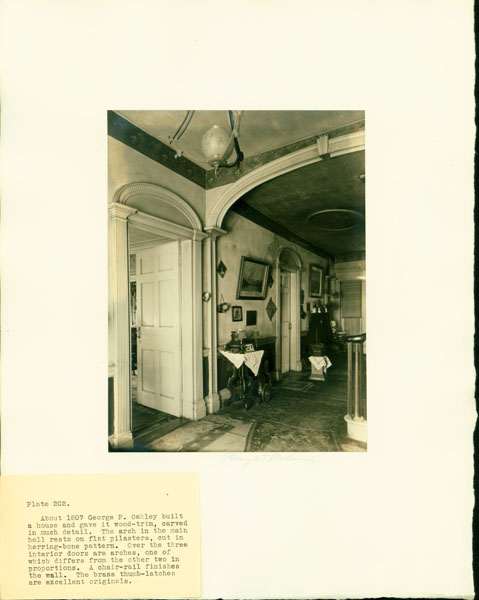