The name Adriance is well known here in the City of Poughkeepsie. The family was once a major part of this city’s development, particularly in the mid to late 19th century. As we have discussed in a previous article, John P. Adriance made a large fortune in the farming equipment industry. It is well known that both his family and the surrounding community benefited from his wealth. For example, his money went into the creation of this library, as well as the building of Christ Church. By the end of the 19th century, the Adriance family had used this wealth to establish three large houses on the corner of Academy and Livingston Streets; only one of those houses is still standing.

The first house in this area was built by John P. Adriance. He called it “Eden Hill” and is seen in the drawing on the right. The house was built in the Italianate style and was passed down in the family to one of the six sons, John E., who later remodeled it. Just north of Eden Hill was the home of Dr. Edward Clay Bolton, who established a house in 1865. William Allen Adriance purchased that house and made it into the grand stone castle that still exists today (referred to as the Smith Brothers Castle). This home was the scene of many lavish dinner parties and musical performances during the Adriance family’s time. In 1925, Robert L. Smith bought the house for $50,000, and by the 1950s it was converted into apartments, as it still remains today.

Across the street from both of these houses was the grand home built for Isaac Reynolds Adriance, who had started off as a clerk in his father’s firm but worked his way up to Vice-President. Isaac had originally lived in a smaller house further up the street at #120, but by the time he had come into part of his father’s fortune in 1895, he had spent just under $50,000 to build a massive 22 room house on the northeast corner of Academy and Livingston that he called “Eden Court” (see the theme they were going with here?). He and his wife Ada Campbell had two children together, Marion and John P., and the home was the scene of a decadent reception for Marion’s wedding to Edgar Anderson in 1918. However, in 1923, the home was also the scene for the funeral of Isaac, who died in the home on April 16th. The house would eventually become the home of his son John P. who lived there until about 1947.

Since only one of these houses (Smith Castle) is still standing, what happened to the other two? The first to go was Eden Court, which John P. sold to the Poughkeepsie Tennis Club in 1958 for $35,000. No one had lived there since 1947, and it was sadly deteriorating. The decision was made to tear it down the year it was sold to make way for new tennis courts. However, the stone pillars on the corner of Academy and Livingston mark the original entryway to the estate, as seen in the photos to the right. The next house to go was Eden Hill, which had been lived in by John P.’s cousin Marguerite Adriance; she was the last of the Adriance family to call that house home. This house was eventually sold off after the zoning ordinances changed to allow for apartments in the area. The house was torn down in the 1960s to make way for what is now known as Executive Towers. 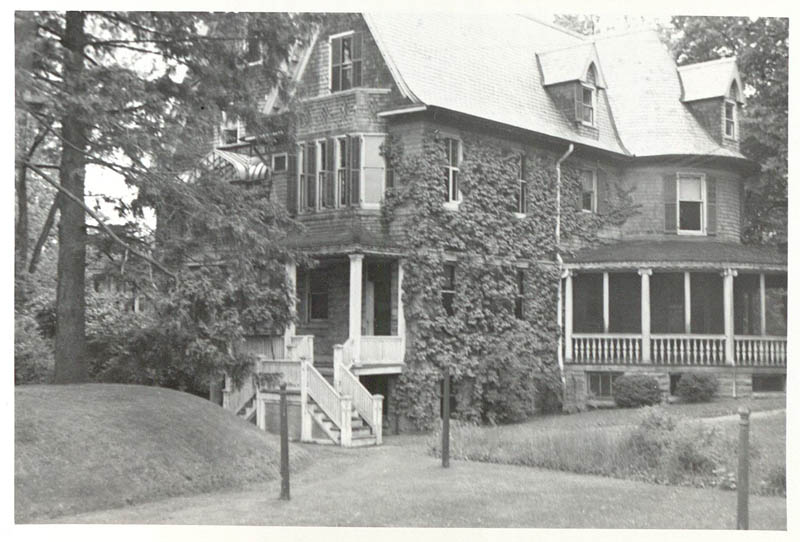