This week we will look at another house just off of the Albany Post Road corridor that is quite grand, yet needs some serious attention, Wyndclyffe. Now it is true it’s a bit of a hike from route 9 to this old brick mansion hidden in the woods of Rhinecliff, but since it lies between the river and the road, it counts. When you think of mansions, you usually think of fine architecture, large rooms, and luxurious interiors, and the phrase “keeping up with the Joneses” generally comes to mind. But did you ever ponder who the Joneses were? And where that saying comes from? Did you know it was right here in the Hudson Valley?

Built in 1853, this fabulous brick house is built in the style known as Norman, and looks like a castle from times gone by. Though the architect is not known, it is believed to be the work of George Veitch, who also designed the first Episcopal Church of the Messiah in Rhinebeck in 1852. It is believed that since the owner of this house, Elizabeth Schermerhorn Jones as well as her brother Edward were major contributors to the building of the church, it stands to reason that they would hire this architect to design a family home. It is known that the master mason behind the home was John Byrd who also worked with Veitch in 1864 building St. Peter’s Roman Catholic Church in Rhinecliff.

The house was praised by famous (and local) horticulturist Henry Winthrop Sargent who wrote in a supplement to A.J. Downing’s “A Treatise on the Theory and Practice of Landscape Gardening,” described the house as “a very successful and distinctive house.” Famed author, Edith Wharton, who was the niece of Elizabeth Jones, would visit her aunt quite frequently as a child and referred to the house as “The Willows” in her book “Hudson River Bracketed.” However, while Sargent believed to home to be distinctive, Wharton only saw it as a source for harsh memories and ugliness. She wrote in her autobiography that she didn’t remember much of her childhood but she did remember that house, she was sure there was a wolf under the bed and…

“The effect of terror produced by the house at Rhinecliff was no doubt due to what seemed to me its intolerable ugliness. My visual sensibility must always have been too keen for middling pleasure; my photographic memory of rooms and houses – even those seen but briefly, or at long intervals – was from my earliest years a source of inarticulate misery, for I was always vaguely frightened by ugliness. I can still remember hating everything at Rhinecliff, which, as I saw, on rediscovering it some years later, was an expensive but dour specimen of Hudson River Gothic.”

These words seem harsh, but the house does seem a bit on the scary side, especially now that it is more or less a skeleton of its former self. But there surely must have been a time when this house was filled with warmth and comfort. Elizabeth Jones, who is apparently THE famous Jones that everyone was (and continues to) trying to keep up with, died in 1876, and the house was sold in 1886 to Andrew Finck for $25,000. He named it Linden Grove, but it has also been referred to as Finck’s Castle and Linden Hall. The house would change hands several times over the next 50 years until it was abandoned by the 1950s.

In 2016, the house was sold for $120,000 and as of 2017; an application to demolish what is left of the now crumbling mansion was filed with the town of Rhinebeck. The future of Wyndclyffe is uncertain, but it is certainly a fascinating structure worthy of remembrance. The images you see off to the right are part of the Tom Dailey Collection which can be found here in the Local History Room. 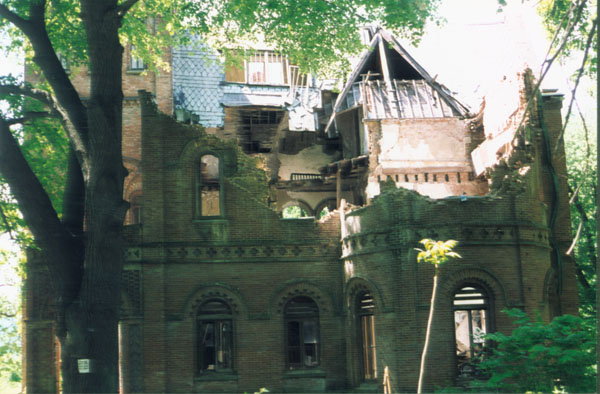